I was contacted some time ago to do a collaboration with a great new clothing company Citrus Leigh Designs (Citrus Leigh). Headed up by two cousins who call upstate New York home. Kacie Cotter-Sacala and Meg Edwards' designs embody what they like to call the "citrus Leigh lifestyle." So what does that mean? Their clothing lends its designs from natural elements and the boho style that has made it's way back into popularity from the 1970s and early 2000s. They have taken this style and added a clean and modern twist. Personally, I am a huge fan of clean lines while adding an earth element to it the mix.

When I was originally contacted by Kacie, I was so very excited and secretly hoping I'd get the opportunity to work with Citrus Leigh Designs. So already being a fan of the clothing brand and of fashion photography, I couldn't think of a better opportunity. Furthermore, this would be my first full blown fashion shoot on location. Kacie arranged to have models, who were fans like me, come to our shoot. Lucky for me, most of the models were already well versed in modeling; a photographers dream. We had eight models, and the artistic direction that was given to me was "witchy boho." We also had three locations for the shoot. Two were located on one property and the third was at a waterfall at a little known public swimming area. I was sworn to secrecy for the location of the waterfall, sorry!

Below are some of before and afters and the stories behind each of the shots I was able to get for the day. First shot was a fun one with the model Alexandrea. She has been a model for me on several occasions. I can not stress enough how important it is to treat your models with respect and build a relationship with them. You never know when you will be asked to work with a model again. Nothing is more heartbreaking when you are unable to deliver because you made a poor decision in the past. Alexandrea is also one of those awesome models who is up for anything. She was more than happy to pose in a stream just 30 or so feet away from a small waterfall. We both loved this spot and brain stormed a few future shoots as well. Alexandrea was also a great sport and, at my request, dampened her hair for me. I felt like having the dampened hair in this shot made it softer and added an undertone of confidence and sensuality without adding too much sex appeal.

As you can see, there was a few adjustments made to this image. Alexandrea has very vibrant red hair and in the original photo you see that the color seems to be muddied. Also, for my fellow photographers, you will see that the white balance is slightly off. Since the theme of the shoot is boho, I also looked to change the overall color tone of the image. I use Adobe Lightroom for editing my images and I also own a few preset packs from different photographers. I absolutely love having presets at my disposal. Mainly, I like that I have a starting off point for my color grading. And a big bonus is that all the images I edit within a single shoot can carry the same color narrative. In my humble opinion when doing editorial and fashion photography, you really want to keep one part of the images constant through out. Wether that be a color tone, a single prop that shows up in each image, or maybe an angle at which the images are taken. The possibles are endless, but it all ends up helping you and your client tell a story.

The preset used for this was "Heat Stroke" by Peter McKinnon from his 2017 Preset Pack 2 (Preset Pack). I enjoy this preset for people who have red hair and are looking for more of a cooler affect to the greens in an image. I did do a few tweaks to this preset to make it work for the ascetic I was after. I ended up shifting the greens to be more vibrant and dropping the saturation of the blues. I also adjusted the contrast to drop the blacks and make the white of the design stand out more. After, I added a radial filter to bring up Alexandrea's face, neck, and chest. This allowed me to brighten a single area without having to lighten all of the shadows of the image. Lastly I used the brush tool to bring the light back into her eyes. 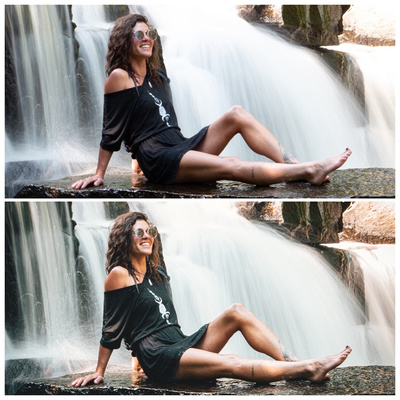 My next shot to share with you is of Jaclyn. This was my first time working with her and boy she was just a ray of light. She was smiling throughout the whole shoot no matter if she was in water, sitting on a chair, or staining by a tractor. This location was the last one for the day, but it was hands down my favorite. I was eternally grateful that this waterfall had these large blocks right in front so we had the possibility of capturing this shot. I was located in the middle of the stream set up with my Manfrotto 290 light tripod. This tripod is actually intended for video, but it is one of my favorite. I like that liquid filled head allows me to adjust my camera without having the head jump too far in one direction or the other. The resistance on the head makes it easy for this small adjustments without having to lose every screw on the tripod. I also made a taboo and did not use a neutral density filter for this shot. I was able to accomplish this image because the water that was coming over the falls was actually moving fairly fast. This allowed me to get the long exposure feel without having to leave my shutter open for seconds at a time. Of course Jaclyn also did a great job at staying as still as possible which allowed me to get the image you see.

In terms of editing, I simply added the preset "Machiato" from the same Peter McKinnon preset pack as the previous image. After which I used the Lightroom sliders to add a bit of clarity for a bit of texture, dropping blacks down, and a bit of luminance smoothing. Lastly I added a vignette to the image to help bring the edges of the images down and draw the eye to the center.

Isn't it funny that some images need that extra care when editing and some are very easily done with just a few adjustments?

Overall, I was super happy that I got to collaborate with this up and coming clothing company and also improving my fashion photography. I will also say that the process was very well handled and clear communication was flowing as the shoot went on. This will be an easy collaboration to work with in the future. Please check out Citrus Leigh Designs on Facebook for their latest items.